As soon as the Samsung Galaxy S8 was released users started to report issues with the device. In this blog we have compiled the most heard complaints that have been causing customer service calls with some of our customers.  Most complaints are device specific, so be sure to equip your website and agents with up-to-date tutorials and troubleshooters.

Screens have a red tint

Some early adopters of the Galaxy S8 have reported an issue with a heavy red tint on their screens, according to TNW. Samsung has already commented, stating the problem is with the factory Color Balance settings on some devices. The manufacturer has indicated that an update will be pushed out that should address the issue.  Meanwhile, users can remove the red tint by manually changing the Color Balance settings from the device menu. Qelp can show your customers how to do this In simple step-by-step tutorials, preventing calls to the call center.

More users are reporting issues with their Galaxy S8 suddenly rebooting for no apparent reason. Sometimes, owners have had their devices restart themselves 7 times in 10 hours, leading to increased annoyance. Samsung hasn’t released an explanation yet, but experts suggest the issue could be related to faulty hardware. Some users have received replacement devices, and still complained about experiencing the same issues, PocketNow reports.

Wireless charging is not working

Users have also complained about issues with wireless charging. Some devices aren’t able to make use of the Fast Charge feature, and sometimes, they are completely failing to charge, according to AndroidPolice. The chargers made by Samsung, specifically for the S8 and S8+, seem to be working fine. However, owners of other chargers, including Samsung’s older models, are reporting issues. 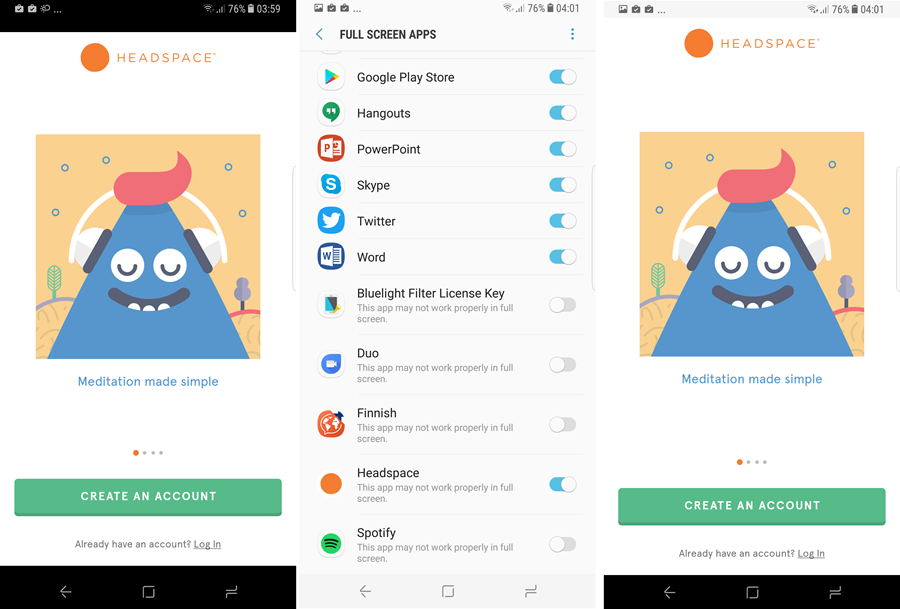 Black bars shown due to the taller and slimmer screen size of the S8. Photo credit: Forbes.com.

Due to its non-standard screen size and aspect ratio, users are experiencing problems with the way Galaxy S8 displays apps. Based on reports from AndroidCentral, there is an easy solution to this. Using a special setting in the device’s menu, users can enable “Full screen apps” from the Display menu in Settings. While this can slightly distort the appearance of some applications by stretching them, it will also prevent black bars from filling up the screen. A tutorial for enabling full screen apps is also included in Qelp’s support content for the Samsung Galaxy S8.

Quad HD resolution is not enabled by default

The Galaxy S8 comes with a stunning Quad HD display, but when first turned on, the device is configured to use a lower resolution. According to AndroidCentral, users can then manually set the screen to Quad HD, at the expense of battery life.

One drawback of having a water-proof smartphone such as the Galaxy S8 is the sound quality after it has been exposed to water. According to tests by PC Magazine, the speakers are producing significant sound distortion for around 30 minutes after contact with water. This is due to the water droplets trapped behind the speaker grills, which normally evaporate within an hour. Once this is the case, the sound quality will return to normal.

Bixby, its features, and availability

The initial reviews of Bixby, by TechCrunch, have shown a large gap between what Samsung is promising in its marketing material for the Galaxy S8 and what end-users will have access to when they first purchase the phone. At the moment, voice commands in Bixby are intentionally disabled for users worldwide. Samsung has announced there will be a rolling release of updates depending on language and location, but hasn’t yet specified any dates.

Several users have reported repeatedly receiving an error message that the Device Quality Agent (DQA) app has stopped working. The software, developed by Samsung, monitors Wi-Fi connections. According to Android Authority, an update resolving the issue is already rolling out to users worldwide.

Even with its overwhelmingly positive response so far, the Galaxy S8 is not without its flaws. All these issues present new and important challenges to mobile operators’ support channels, as the device keeps moving towards a projected global sales goal of nearly 60 million units, according to forecasts by Counterpoint Research.